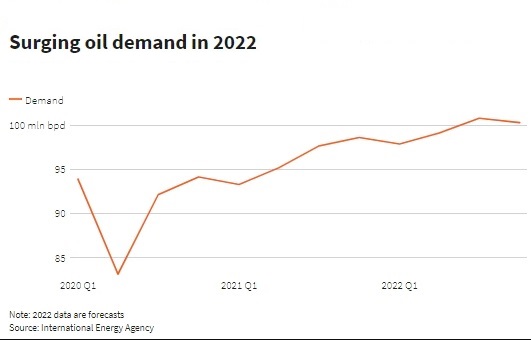 With tightening global supply and rising prices, the importance of securing both near-term and long-term oil supply for Australia cannot be understated.

The International Energy Agency is forecasting oil demand in 2022 to average 99.7 million barrels per day (bpd), an increase of 2.1 million bpd compared to 2021.

This comes as Australia’s crude and condensate production is in a decline, dropping 10.1% in the last financial year to just 334,000 barrels per day, according to government statistics.

This highlights the importance of the play opening discoveries Carnarvon is making in the Bedout basin at Dorado and Pavo in helping secure long-term oil supply for Australia.

The discovery of an additional 43 million barrels of gross 2C contingent oil resources at Pavo provides a potential low-cost tie-back to the first phase of the proposed Dorado development, which is already estimated to hold more than 150 million barrels of oil.

While the Bedout has the potential to help secure Australia’s long-term fuel security, Carnarvon’s FutureEnergy Australia (FEA) joint venture with Frontier Impact Group could help bolster domestic diesel supplies in the near-term, with the latest Australian Petroleum Statistics showing that the nation only has enough diesel stocks to cover 21 days of consumption.

With a planned investment decision later this year, FEA’s biorefinery could help bolster domestic diesel supplies as early as 2023, while having the added benefit of lowering Australia’s greenhouse gas emissions through a low carbon, or even carbon negative, production process.

Renewable diesel produced at the refinery will be in a ’drop-in fuel’, meaning it can replace conventional diesel without requiring modifications to existing vehicles, while it will also burn cleaner and have a lower emissions profile compared to conventional diesel.

While the initial biorefinery will have the capacity to produce roughly 18 million litres of renewable diesel per year, the design is modular, meaning capacity can rapidly be increased. Similar biorefineries can also be rolled out quickly around the country to meet demand and further bolster Australia’s fuel security.