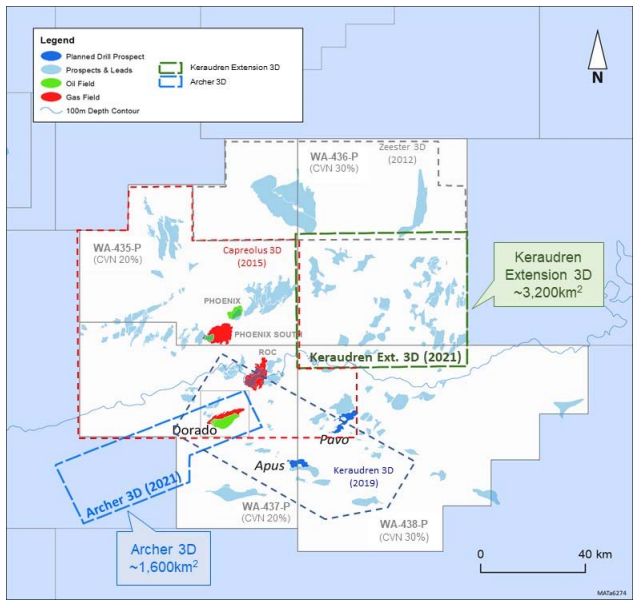 Located in shallow North West Shelf waters 100km north of Port Hedland, Carnarvon holds the Bedout Basin acreage in a joint venture with Santos. Already ‘proven’, with about 200 million barrels of liquids and 1.1 trillion cubic feet of gas discovered to date, drilling of two high impact wells in the basin – Pavo-1 and Apus-1 – will occur from January through to April 2022.

Exploration and drilling history in a nutshell

Despite relatively low exploration maturity, with only nine exploration wells drilled to date, the basin has delivered significant success, with four discoveries from those nine wells.

The acreage currently has close to 100 prospects in 10 plays, with many of them potential Dorado tieback options given their close proximity (<50km distant). Standalone developments are also a feasible option, should further discoveries prove to have high volumes.

Over the past 35 years the seismic data quality has improved significantly, especially in the last decade when the first 3D seismic was acquired. Even in the past two to three years, new seismic processing techniques have further dramatically improved the seismic imaging.

Modern-processed 3D seismic data now covers about 68% of the 22,000sq.km permit area, and is concentrated in the most prospective northern and western zones. All of the six main prospective play fairways surrounding the Phoenix-Dorado Corridor are now almost completely covered by 3D seismic. This means the joint venture can significantly de-risk and appropriately rank high-prospectivity prospects for future drilling.

As the seismic data quality has continued to strengthen, and once Carnarvon has its 2022 drilling results, future targeted exploration and drilling will likely unveil new opportunity in the Bedout portfolio.

Next steps for Pavo-1 and Apus-1

Located 42km east of Dorado in 88m of water, the Pavo-1 well is an attractive prospect, with calculated mean recoverable volumes of 82 million barrels of liquids and 108 Bcf of gas.

Apus-1 is 31km south-east of Dorado in 84m of water and has an estimated mean recoverable volume of 235 million barrels of liquids and 408 Bcf of gas.

The “Noble Tom Prosser” jack-up drilling rig has been contracted to carry out the drilling program in early 2022. Pavo-1 is expected to spud in late January, and in total the two wells will take about three months to drill.

Should the drilling be successful, the development concept for either of these fields could involve 30-40km sub-sea tiebacks to the Dorado processing facility, or stand-alone facilities.

Click here to view a presentation on the Bedout Basin

Terry Walker is an accomplished explorationist with more than 35 years’ experience in the energy sector. His independent appraisal of the Bedout basin was provided to Carnarvon in mid-2021.